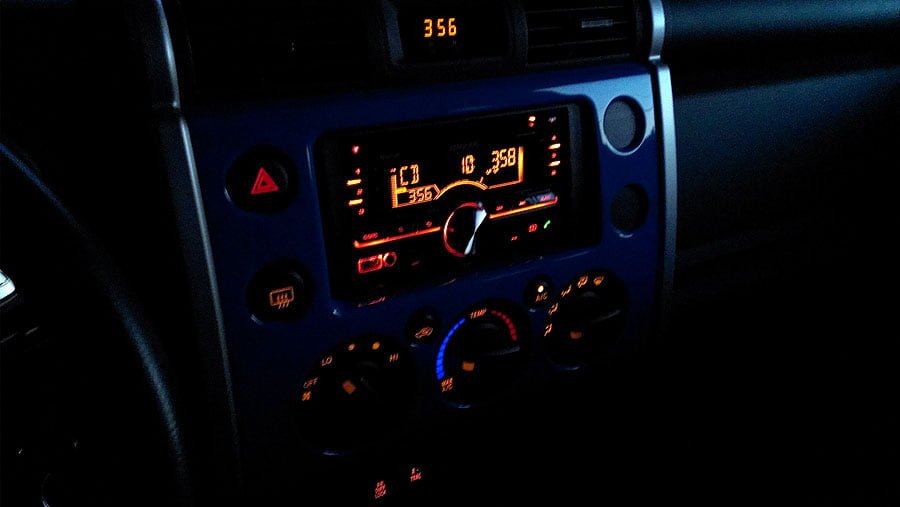 I occassionally shop around for a new vehicle, but haven’t yet found the right one. Of all the cars I’ve owned, the FJ has been with me more years than any other vehicle.

Fiddled with the iPod a bit too long last weekend, which was both frustrating and risky. The 1st gen factory stereo still sounds good, but the aftermarket iPod/Media gateway wasn’t working out.

Called Crutchfield after a frustrating trip through town last weekend and ordered:

Kenwood includes a standard ring, and a separate part designed specifically for Toyota vehicles, but didn’t use either.

The items arrived mid-week and verified the packing list. Did a bike trip Saturday morning and put on some stereo-installer grunge and sandalls.

First thing was to connect the Kenwood’s wiring harness to the two harnesses included with the Metra Kit for my FJ. It took a while to re-learn car stereo wiring, but the Posi-Connectors were very nice. I made two calls to Crutchfield during this phase, never read the directions – they walked me through it. The third Steering Controls harness was overwhelming for me, they emailed a small bit of documentation to help me become familiar with what was happening.

I brought one of the home wireless phones outside and propped it up on the dash, ejected all of the CD’s in the changer, and disconnected the battery’s negative lead.

The Crutchfield documentation was easy enough to follow for getting the dash trim and front/enviromental controls panel removed. When I removed the four 10mm bolts holding the stock stereo, I put Crutchfiled on the speakerphone sitting on the dash. Shot a pic of the four plugs behind the stereo and emailed it to them for an on-the-spot explanation. Starting from the left:

This information was useful for helping me understand the next steps. I’ll admit that there was some doubt about buying the steering wheel controls adapter, but stuck with it.

There was some time alone needed for me to remove the Sirius XM equipment and iPod Media Gateway. It was a lot of cables, harnesses, and devices. Sirius XM never worked well when the vehicle was new and I cancelled the service within the first year. Looking at all of the equipment gave me an indication as to why the iPod Media Gateway never functioned that well either.

Plugging up the new wiring harness I had prepped earlier was when things started to get interesting. Crutchfield walked me through the four wiring connections at this step, but they were very patient with me because I had to tap into a couple wires on the unused controls plug. The picture below was taken when all of the connections were done, before cleaning up and securing the unused wiring. Crutchfiled walked me through bolting on the stereo installation adapter, had to slip-off the Kenwood metal chassis adapter to make things work properly. I put the steering controls adapter module in my pocket and carried the Kenwood out to the car.

Another Crutchfield tech gave me advice on where to mount the microphone (on top of the steering column) and some additional words on the ASWC module. They let me know that we could test without plugging up the enviromental controls. I assembled the new stereo and bolted in it finger-tight. The moment of truth wasn’t that eventful. Reconnected the battery, started the FJ, watched the ASWC module lights go through it’s cycles. The Crutchfield tech had me tune to an FM station, check the speakers, and try the steering wheel controls. They all worked the first time! It didn’t take long to get everything back together and cleaned up.

This particular unit has only a forward-facing USB port, but response was immediate to my 5th Gen 64G iPod. Jammed to some tunes on Pandora as well. Bluetooth connectivity was very easy as well for both the iPod and my Android Phone; Rocket Man via Google Music sounded amazing.

Crutchfiled helped me with some additional infobits and adjustments. Provided the URL to Kenwood’s online manual, and printed a few pages to tweak the color settings to be closer to the stock lighting after washing the FJ. The new stereo’s internal amp generates an interesting-natural sound, that makes all of the speakers sound better. By the time I got back from the car wash, with a cup a single-batch coffee, I figured out how to make the stock subwoofer come alive. As you may have noticed, I made several phone calls to Crutchfield’s Tech Support throughout the day. It may be part of their normal role and support; but there is no way this could have accomplished this without them. Each call was answered by a different tech who was able to pick up at any point and never need more than a moment to check reference info. 90% of the time they were answering right away. If you decided to tackle stereo installation on your own, Crutchfield makes it amazing, possible, and enjoyable.